I’m a believer in how small decisions lead to significant change. Every day we change a small degree one way or another in a myriad of ways: we get healthier because we didn’t eat the bun on the burger, we became more progressive (or conservative) due to the article we decided to read or not read, we cared more about a cause because we watched a speech on Youtube. These micro decisions lead to micro-transformations which compound over the course of our life and when it’s all said and done, we are who we are. We become what we become largely in part to these decisions. Researchers have calculated we make approximately 35,000 decisions a day.

Literature proliferates Twitter feeds and blog posts about good habits and building a strong process of accountability leading to long term results. I’m all about that…but what I find even more fascinating are the key moments and decisions that are life altering. Ones that are made out of left field and some way, somehow, through the power of the universe or good fortune or luck, a life altering shift happens. Three examples I want to share with you: two are real life and the one is fictitious. Starting with the fictitious one gives a good example of the compounding effects one, large decision can make on a life or career.

Alight, don’t laugh, but last week, I rewatched Back to the Future – the original. If you don’t remember the movie don’t worry it’s not important for the sake of the story. George McFly, the father of the main character Marty McFly, has perpetually been pushed around by Biff, the high school bully even into George’s grown up years. George never stood up to Biff and ultimately his confidence remained low throughout his life. Even as an adult he’s still subservient to Biff, who is his boss in the present year. The writers for the film created the iconic line while Biff taps George’s head: “Hello anyone home? Think McFly, think!” I can only imagine how many times that was said in middle and high schools across the country in the 80’s and early 90’s.

Anyways, as the main character Marty, travels back into time 30 years earlier to George and Biff’s high school days, Marty observes the same pattern of Biff’s bullying. As George and Marty (known as Calvin Klein to his dad) become friends, Marty instills enough confidence for George to stand up to Biff at the climatic Enchantment Under the Sea dance. Before Marty’s influence, George never stood up to him, afterwards, George confronted Biff with a left hook for the cinematic ages — knocking him out cold. George went to the dance, won the lady (Marty’s future mom), and the rest is history. Only this time when Marty returns back to the exact same year, he pulls into the driveway of a better, newer house. His mom and dad are fitter and happier than before, portrayed by them holding each other in comfort as they return from their tennis match. Also, George’s confidence compounded into his writing, which he always kept secret and hidden. His first published book coincidentally showed up in the mail that day as well. The cherry on top: Biff is outside in their driveway washing George’s car.

Here is a video of the iconic line from Biff still used today. The first scene is Biff tapping George’s head at his house in present day and the second scene is during the high school years. The third is from the sequel.

And if you’re wondering about the left hook scene, look no more:

Two examples in real life that may or may not be as Hollywood written, but who knows, I think they are pretty close, come from The Atlanta Story Podcast.

The first one is from Brian Steely. “Steely” is a designer in Atlanta that’s done work on everything ranging from bands to spirits to corporations to festivals. His Instagram page does his work more justice than any words I can type. In college, as Steely was still finding his passion and figuring out how and where he wanted to dedicate his life, he took the initiative to send a design, out of the blue, to the address of his favorite band, Widespread Panic. Fast forward a few months later, he gets a call out of the blue on his landline. The band’s manager loves the design and wants to meet in person. From that moment on, Steely found his calling. He spent the summer going to shows, working on his craft, and learning what he loved then and now.

Would he have found it three months later when he potentially sent another design to another band or company? Maybe, maybe not. The decision he made there changed the course of his life forever and the compounding effects are evident today.

The second real life example comes from Derrick Hayes, Founder of Big Dave’s Cheesesteaks. Derrick’s story is one of inspiration, redemption, and grit. He moved to Atlanta from Philadelphia and invested his last dollar to build a cheesesteak shop in his father’s memory. No landlord would give him a chance due to his lack of business experience. After trying and trying to find the perfect spot, he settled on a location in Dunwoody, Georgia connected to a gas station. Not ideal but he didn’t let the circumstance dictate the outcome. As customers were sporadic at best, he leaned on his Philadelphia relationships. One of his friends in Philly knew Eve, the rapper. She was in town filming Barbershop and through a friend let Derrick know that she would stop by the shop on Saturday to try a “real Philly cheesesteak” in Atlanta. Down to his last few hundred dollars, Derrick knew he needed to make a once-in-a-lifetime cheesesteak for Eve. That Saturday, he opened up the shop early to prepare for the monumental day. Lunch rolled around and Eve was nowhere to be seen. He waited all day and all night, but she never showed. Later, he got a text from his friend that said she’s coming the next day, on Sunday. Low and behold, Eve showed and said, “if this is a real Philly cheesesteak, I’ll put it all over social media, but if it’s not, don’t expect anything.” Derrick put his life’s work into that cheesesteak and to this day he claims he’s never made one better. Once Eve had it and loved it, she put it all over social media. Today, there’s a line out the door at both locations and hundreds of thousands of people follow Derrick and his team making delicious cheesesteaks everyday. Derrick’s decision to not only find a way to get Eve in the building but then execute on the perfect cheesesteak is legendary stuff. 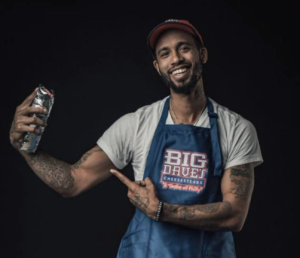 Did Derrick and Steely require dedication, curiosity, and courage to get in the position to make these monumental moments happen? Of course. The biggest takeaway for me is two fold: 1) compounding decisions have generational effects. Steely and Derrick’s kids will be influenced by these stories. 2) be bold enough to reach for these types of compounding moments. When high school students put in their yearbook quotes about reaching for the moon because if you miss, you’ll still get a star…or something like that, this is exactly what that means. If Big Dave never found Eve, who knows the fate. If Steely’s poster was tucked away in his drawer and never sent, it could’ve been a total rewrite of his history. If you don’t buy it, remember George McFly would still be working for Biff if it wasn’t the case.

> “Good friends, good books and a sleepy conscience: this is the ideal…

The Game Show of The Future

Growing up, I had family members that would watch game shows religiously…