This past week, Beltline & Co. announced their move to build a B2C-focused, startup incubator in one of the coolest and highly anticipated building openings coming: Ponce City Market (watch it being built here). Finally, Atlanta is prioritizing consumer-tech focused brands vs. consumer brands prioritizing technology. This is good news and something I want to take part in. Therefore, I signed up for this and hopefully you will too.

Michael Tavani, (fellow UGA Grad) and ScoutMob founder is leading the charge; there are few, if any, in Atlanta, better to lead this charge. The collaborative potential between Beltline & Co, what’s occurring with TechSquare Labs, and of course the Atlanta Tech Village is a perfect recipe for greatness.

Atlanta is finally becoming a tech town where we can have healthy competition, collaborate, spark debate, tell stories, and build something the country and world has never seen. The potential is here and real.

Normally, in the B2B space, where Rivalry lives and breathes, brand, art, design, and most importantly, dialogue around interpretation isn’t a top priority. “Just pick up the phone and sell more, dammit!” Shouts our sub-conscious.

The huge benefit of founding a B2C-focused incubator is the ability to share Atlanta’s story with the rest of the world. The only company doing it right is MailChimp with their Guide To Atlanta. Heck, I send that to folks I’m trying to recruit to Atlanta.

It’s important to make sure and tell Atlanta’s authentic story. Surprisingly, not one journalist, including Creative Loafing’s normally scrupulous Max Blau, dug into Beltline & Co’s Brand and the story it’s already telling with the imagery used. This is a consumer-brand focused incubator, right?

Art is always left to interpretation or at least that’s what I learned from my mentor/friend of mine, Sam Stabler, while sharing hundreds of Scrabble games and countless pints in Athens, Ga.

So think of the following as nothing but a classic interpretation piece on Beltline & Co’s brand.

Living 5 blocks from the Beltline and exploring it regularly, I can confidently write that borrowing the brand from one of Atlanta’s most innovative projects in the last 15 years is brilliant. Original? No. Yet, every great artist borrows ideas — even Steve Jobs, even The Beatles.

I love the idea of using Atlanta’s skyline to highlight our unique mix of arbor-loving neighborhoods mixed with a vibrant metropolis. Look no further than this blog’s header for verification.

However, ever since Beltline & Co’s debut, my inability to make sense of their reasoning to use a background of our city’s skyline from 1966 is too intriguing not to write. My desire for clarity is unquestionably what spawned this Sunday morning post.

Most Old Things Are Cool, But Not All

There’s definitely a trend among my generation’s more astute observers to appreciate something hand-made. Many of us grew up with plastic Micro Machines and Hot Wheels with “Made in China” printed on the bottom. Today, anything original, authentically made, or built with hand-crafted skill and expertise is respected.

Unfortunately, most original pieces, whether is an old brick-built industrial complex all the way down to individually-built furniture are older. Read: they don’t make things like they used to. Instead, IKEA comes in and makes profits and cookie cutter furniture. Not cool.

The complexity around what’s cool and valuable and what’s not, starts to take an educated turn around the stories behind each original piece.

Many of those families that moved to Alpharetta, Cobb County, Roswell, and Marietta, had kids. Those offspring or often referred to as “Millenials,” mainly white ones, are moving back into Atlanta city proper at a rate faster than ever before. Documentaries like, The Atlanta Way, explore the cause and effects of gentrification in Atlanta. The last thing anyone wants to do is take 40 minutes to get to the Hawks game.

Is the 1966 skyline of Atlanta a symbol of what’s to come: white suburbia offspring moving back into areas of the city where their parents didn’t care to raise a family?  Perhaps a rebellious cause noted by Business Chronicle, journalist, Urvaksh Karkaria

Atlanta’s Most Prosperous Decade – The 60’s in Atlanta brought 3 sports teams, thousands of jobs, integration in city’s public schools and downtown businesses (most notably Rich’s) and much more. Does Beltline & Co hope to spur a prosperous decade of growth as in the 60’s? See image below: 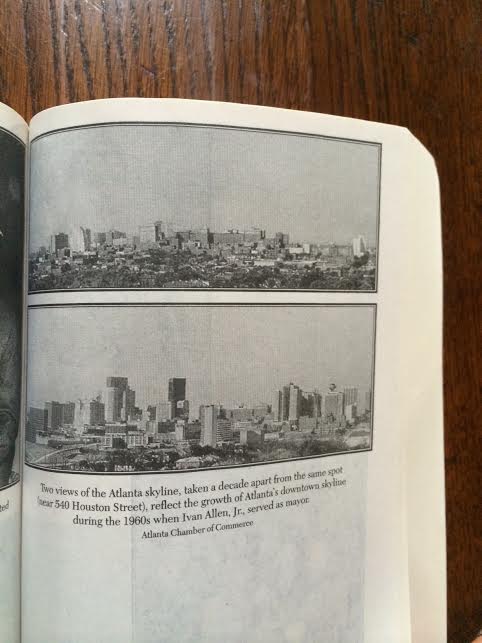 It might just be because it’s the first image of Atlanta’s Downtown Skyline on Atlanta Time Machine. Highly unlikely.

It’s clear the branding and design of the Atlanta Tech Village is having an influence on the design community in the South. Will Beltline & Co have a similar effect?

Interpretations of Beltline & Co’s brand are already exciting and intriguing, which ultimately, is the goal of any great artist.